It was great to see Michal again an old friend of ours whom we met in London over 20 years ago at Tent City. We loved the old farm house where he lives, and along with the visit to the caves, got to experience the local area with some walks amongst farmlands and rivers and of course some authentic local restaurant cuisine. A great opportunity to catch up & be in the Czech Republic again, however clearly not long enough as Maria & the boys were not a able to complete the 500 piece puzzle before we left and we only got to counting up to 6 in Czech!!
Yesterday was also a trip through a number of countries where en-route to Zagreb in Croatia, we would pass briefly through Austria and Slovenia. This is clearly evidenced by the motorway “vignettes” which are required for these countries which are now starting to cover the windscreen of the van! Somewhere near Vienna we also clocked 5,000 miles (8,000km), which I guess reflects a milestone of how far we’ve traveled, but probably more importantly, how well the van is holding out!!

[9th Oct]
We are now in Czech Republic in Olomouc with Michal, a friend of Mama and Papas, and today he showed us a natural cave which you pay to go in and a guide takes you through. It had a path so you didn’t have to climb around. First we walked on the upper level and we could almost touch the stalactites on the ceiling. Then the guide, who spoke no English so wasn’t much use, showed us through onto the second floor down. On the second floor he showed us ‘the carrot’ a stalactite which was 2 metres tall and we learned that the stalagmites and stalactites, grow on average 1mm every 10 years! We walked on through the narrow passages and then we came to something that looked exactly the same as a curtain when it had a light behind it, but it was actually limestone shaped as a curtain. Then we kept walking through the passages and caves and then we walked out the exit into a forest and I found it interesting how such a big cave could be sitting in the woods. We took some great photos of the stalagmites and stalactites, here is an example… 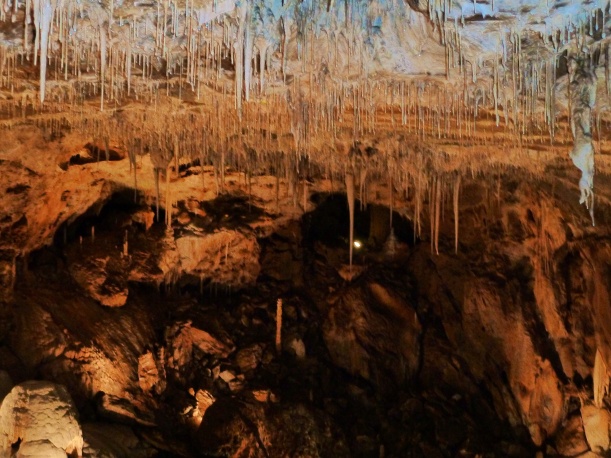 On Tuesday we drove from Dresden 6 hours ( including stops) to Visky a village near Litovel which is a town near Olomouc in the Czech Republic. Part of the reason the trip was so long was our “dramatic” stop in Prague.
Before leaving Dresden, Dad had declared his “great” idea of stopping in Prague for Lunch (surprisingly as we seldom plan ahead!). After leaving the motorway and circling the city at least twice looking for a car park, we finally after about an hour found a park approx 20 minutes from Wenceslas square. Given we no longer had the the time for a “nice & relaxed lunch overlooking the square or the river”, we got some lunch in one of the food stalls in the Square. Nilay & I got a half sausage each and mama and papa got potato dumplings with sour cabbage and we had spiral donuts cooked over a BBQ for desert.
After we’d finished our food we headed back to the van in hope that we’d be back before one hour was up suspecting that we’d have to pay another whole hour worth of parking even if you were only a minute over time. Of course we ended up paying for the extra hour as we were about 8 minutes over time !! 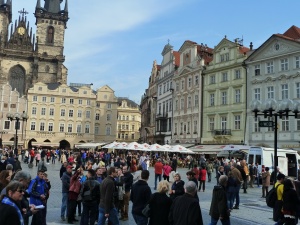 We decided that Dresden would a good place for a “transit stop” for the ~600 mile journey between Hamburg and Olomouc in the Czech Republic. After a long day of driving delayed primarily by road works, we arrived at the campsite which will be remembered for blowing fuses and a wonky table tennis table.
Maria and I had last been in Dresden in 1999 which we had remembered as a picturesque city which was under significant reconstruction and restoration which we now saw had resulted in a dramatic transformation into a modern yet historically preserved city. Most notably is it’s most famous landmark the “Frauen Kirche” (Church of Our Lady) which was almost completely destroyed in WWII. Nilay & I decided that we would like to go the viewing platform on the tower above the dome (made from 12,300 tonnes of sandstone) where we had great views and a perspective of the whole city.