Yesterday was a great day which we spent mostly on learning about Joan Miro, an artist born in Barcelona. We also spent some of the day looking at the Sagrada Familia in more detail, unfortunately not going inside though as there was a huge queue to get in 😦 .
We started the day by taking the bus to Barcelona and taking a tube to where we’d hopped off the hop on hop off city tour busses the day before. However at the tube, (or metro as the Spanish call it) station, my ticket got jammed in the machine and one of the tube staff had to get it out for me! When we got to our destination on the metro we hopped on a hop on hop off city tour bus on which we went to the Miro Museum and saw lots of Miro’s paintings (which weren’t the most fascinating things in the world, to me at least, apart from one or two which I quite liked). After that we went to have lunch and to see the Sagrada Familia where we went into the gift shop and saw ‘The Cryptogram’ which Gaudi created. The cryptogram goes like this:

I found this interesting as every straight line of 4 numbers, including diagonal adds up to 33 (Apparently there are 310 combinations of numbers which all add up to 33! See how many you can find!) Why the number 33 you may ask, well the the reason is this is the age that Christ was when he died. 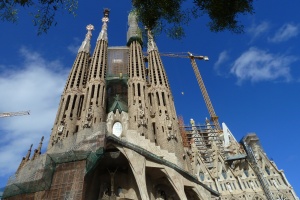