Yesterday Michel once again asked us whether we would like to go on a boat trip with him. Of course we couldn’t resist this amazing opportunity.

This time we went past the Fort  la Latte and further, direction Saint Malo.
Just past the fort, we saw a marker signalling a boat wreck beneath us. Michel told us about how this boat had sunk.
The ship “Laplace” had been a 90m long ship. It was originally an American warship, but was sold or given to the French after the Second World War. The french used the ship for meteorological research. On one particular day in 1950 the crew of the Laplace had been invited to a party in Saint Malo. After the party they chose the place near the Fort La Latte where the wreck is now to spend the night. However under the water there were magnetic mines left over from the war and consequently every time the boat rocked the mines ticked once on the seventh tick,  KABOOM causing a bad end for 50 of the 54 on board. The four lucky survivors swam to safety.
After this we headed to the new port of St. Cast nearby before we turned back. Afterwards when we where near the Cap Frehel  we went fishing, however caught no fish.
After this unfortunately our boat trip came to a end. 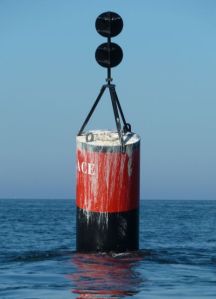