Our delayed visit to Fort Cochin is probably best described as a “masala” of sights and experiences our learning in India has been that each day contains a varied mix of sights, sounds, & smells and that the most memorable experiences are usually ones which we have not planned. We decided that at first to get over to the peninsula we would go for the “local” ferry experience, which meant separate lines for “ladies” & “gents” for buying tickets albeit very cheap. Of course we didn’t really know if we had arrived at the right dock at first, as there was no obvious sign but the locals were helpful and after passing through another docked ferry as there was not enough space for 2 at the dock, we set off to explore. Our first stop was a cafe for breakfast and the “Solar Cafe” across the road from the ferry jetty was a great find. A nice setting with great food including some familiar favourites. Not knowing exactly where the sights were we decided that we would allow ourselves to be convinced that a whistle stop rickshaw tour of the key sights would be the right approach. This included many landmarks arising from the various foreign occupiers of this key trading port including St Francis Church (believed to be India’s oldest European built church), The Dutch Cemetery, Indo-Portugese Museum (where Maria provided an impromptu German lesson to Josef at the ticket counter), Spice Market, and the Chinese Fishing nets* where the earnings of the fisherman from our ‘donation’ for being able to take photos and go on one of the large structures will surely have been his best “catch’ of the day! The highlight of the day will of course have to be the open air laundry where Maria seized the opportunity to get in a bit of ironing with the “cordless” heavy coal iron. On the Lonely Planet’s recommendation, we decided to have a look at the Kashi Art Cafe which had some contemporary Indian artwork in a contemporary setting (we could have easily been in an art gallery cafe in a large European city). For dinner, we took the recommendation of a local shop owner and went to Ocaneos Seafood Restaurant. The food was excellent and whilst the seafood dishes were great, a diplomatic consensus landed on Dhal Kerela Curry (Kerela style dhal with turmeric & crushed chilli simmered in coconut milk) as dish of the day. Our last bit of excitement for the day was an eruption of a bit of road rage during the rickshaw ride back to the ferry jetty initiated from a mini bus blocking the road. Whilst our perhaps often naive view is a lack of any compliance to road rules, this showed us that there is a clear code of conduct on the roads!

* Enormous cantilevered spider-like contraptions a legacy of traders from the 1400s seen as as the unofficial emblems of the Kerala Backwaters. 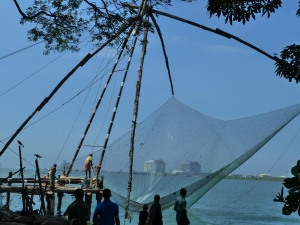 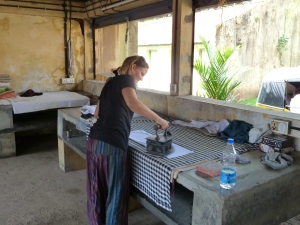