On Sunday afternoon we travelled 2hrs by car from our hotel near Alleppey to Kochi.  After settling into our new accommodation, we decided to take a walk along Marine Drive,  a walking area along the waterfront busy with tourists and tradespeople who are trying to sell all kinds goods from boat rides, to fruit, ice creams, and toys.
Once we returned to the hotel we were informed that our plan to do a day trip to the very picturesque village of Fort Kochi the following day would not be possible, as there was a general strike planned for Monday and there would be no transport at all. As Milan was also beginning to feel unwell with flu symptoms, we decided that maybe we should have a rest-day on Monday.
The strike on Monday actually meant that all shops and restaurants were closed and taxis, boats, auto-rickshaws – absolutely nothing was running. Jayesh and Nilay went for a little walk around the strangely deserted streets and saw a protest march of strikers. I was curious to find out what a strike of this size was about and this is the information I found:
The opposition party in Kerala had called for a state-wide strike protesting against the central government’s move to implement the report on the Western Ghats. The report states that about 123 villages in Kerala have been branded as ecologically sensitive. According to the report, sand mining, quarry works, functioning of industries that come under the red category and buildings and development of any township or construction over the size of 20,000 sqm in the ecologically sensitive area should be banned.
An interesting conflict, as the report is an attempt to protect the very beautiful, but sensitive environment in Kerala – a feature that we, as visitors very much appreciated. However to the local people the implementation of this report might affect their livelihoods, and so they organised this huge strike, which completely stopped us and any others from being able to travel, eat out and even buying food was not possible. Consequently our lunch on Monday consisted of some cereal bars that we had brought with us from  England. Fortunately the strike had finished by 6pm and we were able to have a meal in a local restaurant.
Maria 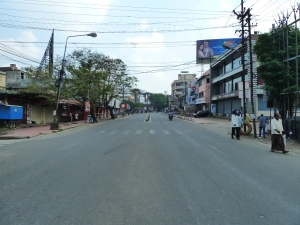 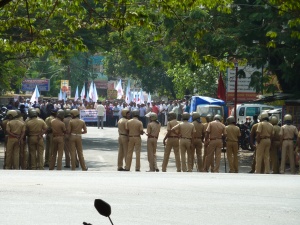