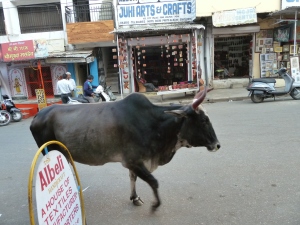 On Wednesday we travelled from Jaipur to Udaipur, a journey of 440 km which took approximately 7 hours. Although the majority of the journey was on a national Highway, a toll road which is mostly used by trucks and motorbikes, there are also frequently cows, tractors, dogs or people on this road, so one has to drive with care in order to avoid collisions with animals. Occasionally we passed through small villages or past basic roadside tea shops which are small shelters constructed out of wooden branches and tarpaulin where one can buy crisps or fruit or tea. Usually there were dogs, cows, goats and sometimes pigs around, roaming freely around these areas, searching for food in the piles of rubbish that is left around human settlements or on the sides of roads.
Sadly we also came past the site of an accident where a bus had run into a cow. The cow was dead and the bus was badly damaged. The passengers, were standing by the side of the road, by the look of their faces they were in shock at what had happened.

When we arrived in Udaipur, our driver had to negotiate his way through streets packed with auto-rickshaws, motorbikes, cars, cows, and the occasional elephant transporting his owner on his back. To get to our hotel near Lake Picchola in the old part of Udaipur was a little tricky, as the streets are very narrow around here, and clearly not constructed for cars. However we got here at last and checked into our hotel (which is owned by a German who also owns the German bakery across the road). From the rooftop restaurant of the hotel we had amazing views over the Lake and the Lake Palace, a hotel in the middle of the lake which served as a setting for the James Bond film Octopussy!